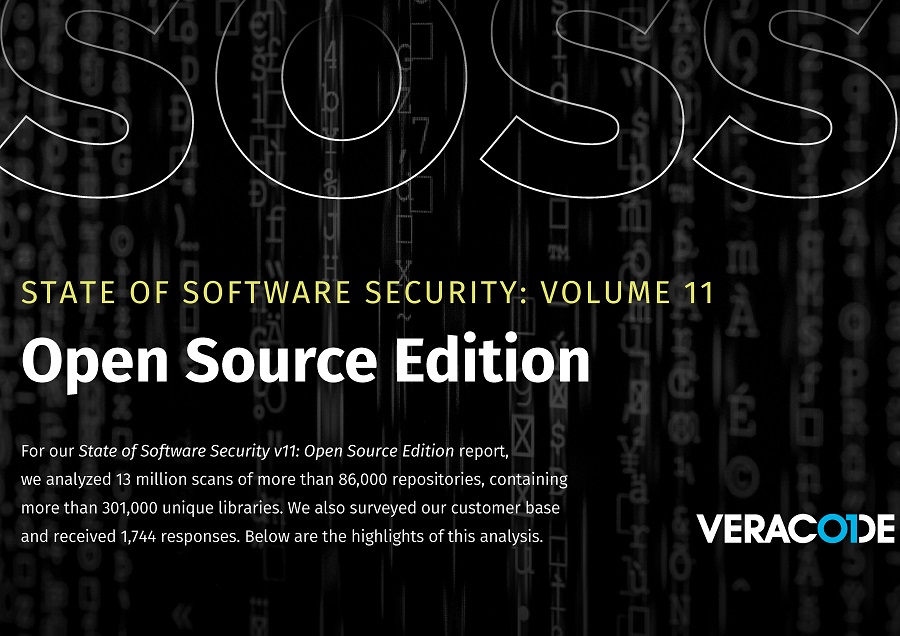 Veracode, the largest global provider of application security testing (AST) solutions, today launched new research that finds nearly 80 percent of the time, third-party libraries are never updated by developers after being included in a codebase – despite the fact that more than two thirds of fixes are minor and non-disruptive to the functionality of even the most complex software applications. Open source libraries constantly evolve so what appears secure today may no longer be so tomorrow, potentially creating a significant security risk for software vendors and users. The Veracode State of Software Security (SoSS) v11: Open Source Edition analysed 13 million scans of more than 86,000 repositories containing more than 301,000 unique libraries, and also surveyed nearly 2,000 developers to understand how they use third-party software.

The Veracode research also finds notable fluctuations in library popularity and vulnerability year over year. For example, four of the five most popular libraries in Ruby in 2019 were no longer in the top 10 in 2020, while some of the most vulnerable libraries in Go in 2019 became less vulnerable in 2020 and vice versa. Since nearly all modern applications are built using third-party open source software, a single flaw or adjustment in one library can cascade into all applications using that code, meaning these constant changes have a direct impact on software security.

Almost all repositories include libraries withÂ at least one vulnerability.Â Chris Eng, Chief Research Officer at Veracode, explains, âThe vast majority of todayâsÂ applicationsÂ use open sourceÂ code.Â The security of a library can changeÂ quickly, so keeping a current inventory of whatâs in your application is crucial. WeÂ found that once developersÂ pick a library,Â they rarely update it.Â With vendors facing increasing scrutiny around the security of their supply chain,Â there is simply no way to justify aÂ âset it and forget itâÂ mentality. Itâs vitalÂ thatÂ developersÂ keep those components up-to-date and respond quickly to new vulnerabilitiesÂ as theyâre discovered.â

Despite the dynamic nature of the software landscape, developers are often not updating open source libraries after including them in software applications. A lack of contextual understanding about how a vulnerable library relates to their application can be a roadblock. For example, developers who report they lack this information will take more than seven months to fix 50 percent of flaws, but this reduces dramatically to three weeks when they have the right information and guidance. Moreover, they can respond quickly when alerted to a vulnerable library, addressing 17 percent of flaws within an hour and 25 percent within a week. Thus, when provided with accurate information in a timely manner, developers can appropriately prioritise security and remediate flaws fast.

Other key findings include:

Last month, the White House released an Executive Order on Cybersecurity of which nearly 25 percent focused on securing the software supply chain. Moving forward, software vendors selling to the Federal Government will be required to disclose the composition of their software and ensure that software applications have gone through automated testing.

Chris Wysopal, Co-Founder and Chief Technology Officer at Veracode, said, âAs the Executive Order continues to take shape, anyone developing software should ensure they are scanning their software early and often in the development lifecycle. The growing popularity of open source software, combined with increasingly demanding development cycles, results in a higher propensity to software vulnerabilities. Scanning earlier in the process significantly reduces the risk profile, and most fixes are minor so will not impact the functionality of even the most complex software.â