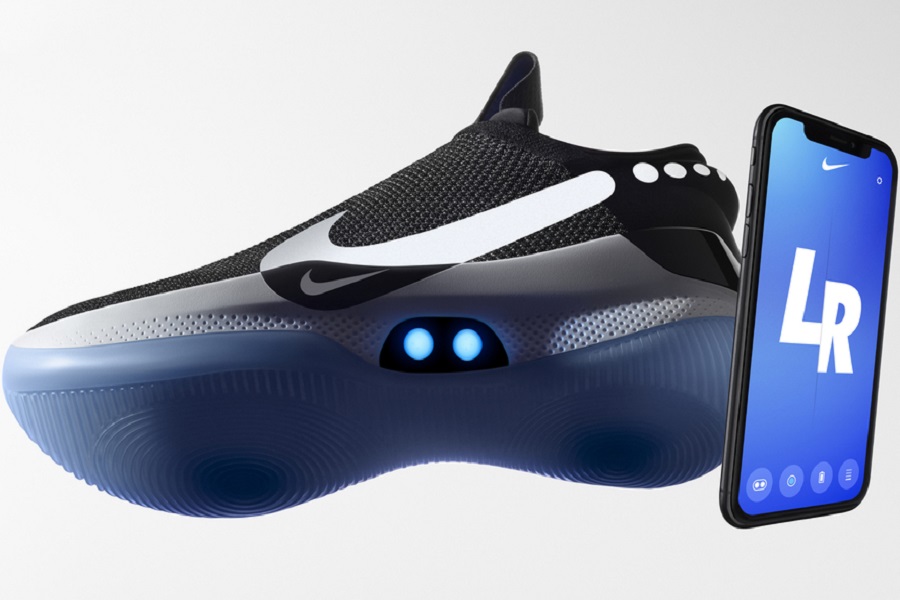 Nike has launched self-lacing trainers, which fit themselves to the shape of the foot and are controlled via a smartphone.

It is the latest iteration of the futuristic footwear, first referred to in the film Back to the Future Part II, and made reality by Nike in 2016.

The latest version, called Nike Adapt, will cost $350 and will not require a physical button to activate the laces.

The launch event was hosted on live-streaming platform Twitch.

“We picked basketball as the first sport for Nike Adapt intentionally because of the demands that athletes put on their shoes,” said Eric Avar, Nike’s creative director of innovation.

“During a normal basketball game the athlete’s foot changes and the ability to quickly change your fit by loosening your shoe to increase blood flow and then tighten again for performance is a key element that we believe will improve the athlete’s experience.”

Users can customise the fit and control it through a smartphone app which will store fit preferences. They can input different fit settings for different moments in the game, loosening it for a timeout and tightening before they re-enter the game.

When they step into the shoe, a custom motor and gear will sense the tension needed by the foot and adjust accordingly.

The app will also store the data, which athletes can choose to share with Nike.

The shoe goes on sale in February.

Michael Sawh, editor of wearable tech website Wareable said: “Obviously this is a big nostalgic nod to the self-lacing shoes from Back to the Future that have now gone from movie prop to the real deal. When Nike teased these last year, there was a whole lot of buzz around them. I think there’s going to be a lot of movie fans and Nike sneaker lovers that will want these in their collection.

“Whether a shoe that removes the needs for laces is necessary is definitely up for debate. I vividly remember back in 2012 when Nike launched a smart shoe designed for runners to record a host of different metrics. That didn’t really stand the test of time and quietly disappeared.

“Nike says it’s going to roll this technology out to other shoes in its range and that’s where I think it could go from gimmick to actually being useful. Runners, for instance, need to make sure their shoes are well laced-up before going out for a run or a race.”

Ben Wood, a mobile analyst from consultancy CCS Insight, said: “For a long time we have predicted growth in smart footwear. It’s a logical place to embed technology but the underlying incentive for shoemakers is that it offers the ability to get information on usage, performance and wear.

“As with any new technology category there are going to be concerns about how consumer data will be used but the sorts of metrics Nike is able to capture are arguably of a lot less concern than other smart devices that are doing constant measurements on health such as heart rate.”