Raising the bar for faster processes 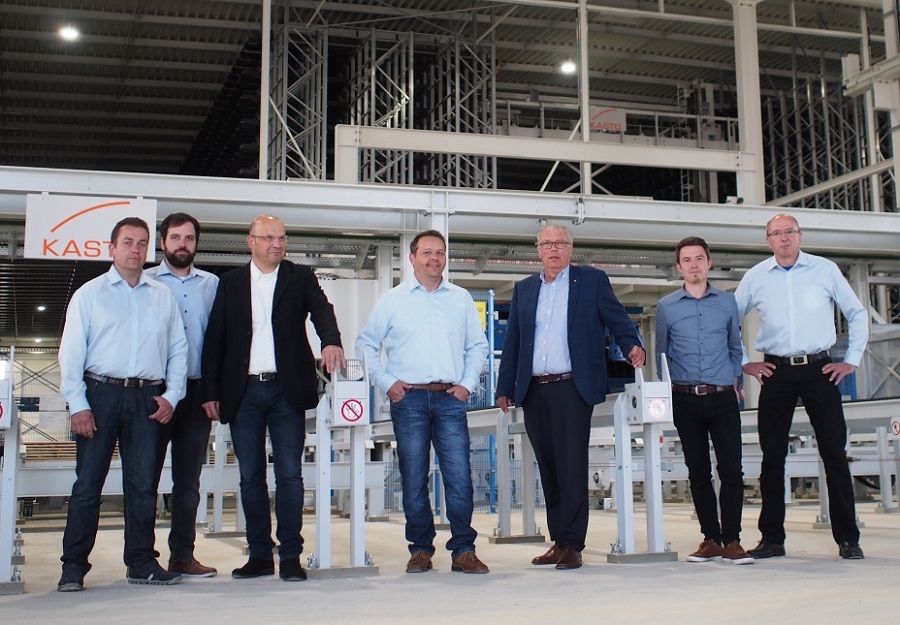 Things were once again getting tight at medium-sized steel merchant Kicherer in Ellwangen. Expansion of the range and increasing aspirations for ever shorter delivery times had made a more efficient warehouse indispensable. The many yearsâ partnership was just one of the reasons that the company decided on a flexible, high-performance bar storage and distribution system from KASTO.

âWe had a great range, but needed far too long to load the lorries,â says Eberhard Frick, Managing Partner of Friedrich Kicherer GmbH, summing up the initial situation. Specifically, a system was required which was significantly faster than the existing stacking cradle system along with an expansion of the existing steel centre. Right from the initial calculations, it was clear to those concerned that not only the storage capacity but also the material flow would have to be optimised. It was therefore decided to build a new, second steel centre along with an office and multifunctional block. In order to achieve an optimum storage solution, Kicherer consulted two well-known suppliers of bar storage warehouses â one of which was KASTO.

The history of Kicherer with its long-standing tradition began 300 years ago. Founded as a nail maker in the centre of Ellwangen, Friedrich Kicherer took over the business in 1884, built it up into an ironmongery and household goods store, and transferred it to his daughters Auguste and Maria. In 1950 Ernst Frick joined the company to support the existing management. 17 years later, he took complete control of âFriedrich Kicherer Eisenwarenhandlungâ and developed it into a wholesale company. In 1978, and in 1989 and 1992, Eberhard, Hans-JÃ¶rg and Gunter joined the management of their parentsâ company.

âOne will win,â says Eberhard Frick, recalling the motto of the three brothers regarding the economic situation at the time. The newly opened connection to the motorway network increased the competitive pressure on the steel merchants. âAt first it appeared that the competition would win,â explains the Managing Partner. But by the skilled expansion of the portfolio and optimisation of the logistical processes, the family company grew to become a leading supplier of steel, iron goods, building products and structural elements. The most recent company history is characterized by new buildings, the acquisition of land, expansion and modernisation. In 2014, the management team was supplemented by fellow partners Friederike and Daniel Frick, thus laying the foundations for securing the companyâs succession.

Today, Kicherer is one of the largest, medium-sized steel merchants in Germany and employs more than 350 staff. Modern logistics and warehousing technology enable a turnover of 210,000 t of steel per year. Six KASTO automatic storage systems and 44 cranes optimise the processes. The storage experts installed the first of these in Ellwangen in 1995. Over many years of collaboration, this was supplemented by racking systems for tubes, stacking cradles for structural steel profiles, angles and boiler tubes, and a UNILINE 3.0 sheet metal store with 610 cassettes. These investments were mostly driven by the objective of expanding the range and providing faster deliveries. âOur experience with the KASTO systems has been positive throughout,â emphasises the Director.

KASTO was once again awarded the latest project, a bar storage system with central loading station. The innovative and flexible solution convinced Kicherer as well as the solidarity, punctual deliveries and positive experience gained by the steel merchant on previous projects with the Achern-based company, both at a personal and technical level. Other requirements included stable and reliable operation as well as a seamless connection to the existing IT system, as Kicherer had been relying on paperless product management since 1995. The loading time was also to be considerably reduced, as Hans-JÃ¶rg Frick explains: âAt the moment, our lorry drives through seven halls for loading. If everything goes well, this takes 75 minutes. The objective is to reduce the time to less than an hour.â

The KASTO solution is based on a UNICOMPACT storage system which, with a height of 15 m and a length of 115 m, has space for around 10,000 cassettes. Each cassette can accommodate material up to six metres in length and has a payload of up to 3.4 tonnes. Fast storage and retrieval is made possible by the five storage and retrieval machines (SRM) which are distributed over three aisles of racking. At the same time, the second SRM, as a slave in one racking aisle, undertakes predominantly storage and exchange orders between the honeycomb storage systems, sawing and secondary picking orders. The small approach dimensions of the storage and retrieval machine ensure that as much space as possible is used for storage purposes. The SRMs approach the storage locations at up to 180 m/m, thus making the bar stock speedily available at the output stations on the âgoods-to-the-personâ principle. Directly connected to the system are three KASTOwin F bandsaw machines. In order to transport the picked materials to the loading station automatically, KASTO has installed two manipulators on separate rails. From these, the bar stock travels to one of 25 loading stations via a conveyor system. A station with a packaging machine is also provided for wrapping with stretch film. The system is designed for extremely high availability

The Kicherer and KASTO IT departments have jointly modelled all components of the new logistics systems in a unified software package. This is also a mobile version of the KASTOlogic Warehouse Management System. As well as storage and picking, dispatch has also been incorporated, including a dispatch inspection system. âEvery bundle that has been picked is scanned again on loading, and automatically marked as loaded in the material requirements planning software,â explains Kicherer IT expert Maximilian Utz. Every single step that the material in the warehouse has to take can therefore be viewed at any time. This simplifies operation, avoids errors, and enables Kicherer to ensure its high delivery quality and speed, even with a growing product range. âKASTO ultimately supplied us with the best solution,â emphasises Eberhard Frick. âI am sure that this warehouse will also have the high performance and quality to which we are accustomed from KASTO.â